Can We Climb This Mountain?

I feel the need to make this statement before you even read this post... I am not a hoarder!

I've mentioned before that I'm pretty sentimental and I tend to keep things that most people would throw away. This doesn't mean that I keep EVERYTHING, just odd stuff. Actually, Mike kept more stuff than I did. Anyway, as I continue to go through things I've found stuff that I forgot we even kept. Many of them I've decided I no longer need, while other things make me cry. Who are we kidding I cry all the time, but that's not the point.

Yesterday, I picked up Mike's utility knife and began opening boxes from the shed. As I started to cut open the first box I could almost hear Mike say "Mel, you are going to slice your leg open!" However, no trips to the ER were needed, and much to my surprise I found this... 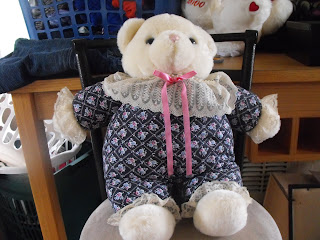 This bear was given to me by my grandpa when I was seven or eight. I didn't even know we had kept it. I was really excited to find it. Then I found 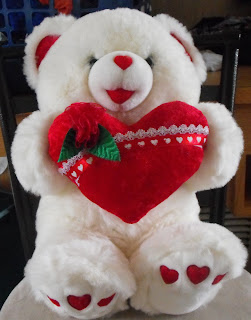 Mike gave me this bear for Valentine's Day in 2000. I also found 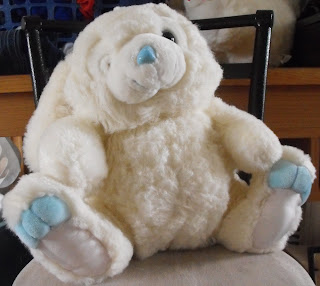 This bunny belonged to Mike. I honestly can not remember where he got it or if it had a name, but he had it even before we started dating. He kept it on his bed at his moms house. I'm not sure how bunny lost his eye, and his nose is starting to come off, but other wise he is perfect. So, I plan on fixing him up and putting him back on our bed where he belongs.
I also found my Little Mermaid figures he bought me our first Christmas together. Unfortunately, our bean bag we bought in Utah was ruined from sitting in the shed and I had to throw it away. I cried over that one. I also found the pair of jeans I was wearing the first time I met Mike. Okay, now I know this sounds a little lame, but they were my favorite jeans for like a year and now I'm glad I have them. Of course I cried over those too. I found the Hot Wheels cars he had collected for the kids. How is it possible that so many memories can be packed away in a box? More sorting to come this weekend who knows what we will find.
I have really struggled this week, thus the lack of posts. It's been an emotionally exhausting week. As I sat down and decided I should try to put some of it in words, I flipped through my pictures on my camera. I found a picture that I took over the weekend that helps me remember that Mike may be physically gone, but he lives through our children. They have inherited many of his wonderful qualities. Tyler is quite the artist, just like her dad.

It might be possible that the joy and the grief you find in sorting through things, reorganizing, and taking a step at a time through life will be healing. My heart goes out to you. I hope that someday you will be able to look at those things that hold so many memories and smile at the joy they brought you instead of feeling grief over what's been lost. But what you're feeling right now seems perfect to me. Sorry if any of that came out weird. There's not often the right thing to say when the heart is involved.