Before You Come To Any Conclusions, Try Walking In My Shoes

The title of this post was taken from the song Walking In My Shoes by Depeche Mode.
Shoes, I want to rant about them for a bit. They infuriate me. Actually, it's not just shoes in general, it's the shoes that my kids wear. I know that kids grow, and I can't expect one pair of shoes to last them forever. However, I remember as a kid getting one new pair of shoes before school started, and that pair of shoes lasted me until spring. I didn't have a ton of shoes, I had one pair of tennis shoes and a pair of shoes for church. My kids are kind of the same way. They don't own a whole lot of shoes. I tend to by Sketchers for myself, and I've bought all different brands of shoes for the kids. We've tried Nike, New Balance, Fila, Sketchers, and even just Walmart brand shoes. Most of the time within a month their shoes tend to look like this 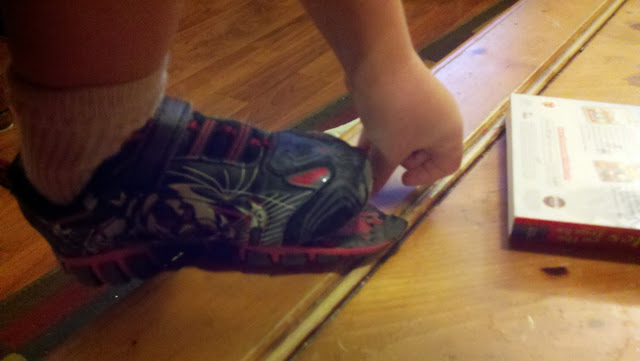 Seriously look at this! His shoe was talking to him! I bought Mason these not even a month ago, and I had to buy him new ones yesterday morning before I could go to school. That's not all though. The shoes he had before this were sketchers and they lasted two months. The ones before that were Nike and they lasted about two months. I've tried name brand, and off brand and nothing holds up against my kids. The thing is it's not just Mason. It happens with Sebastian and Tyler as well. I'm tired of buying shoes that just don't last. Where did the quality go? Or maybe it really is just my kids. Whichever way it is, I know that by Halloween he will need a new pair of shoes.
What makes it even worse is that the little things like this are once again all me. At ten the night before I remembered that while I was at the store that day I had forgotten to get his shoes. I couldn't ask someone to run out and get them for me. I had to plan to leave the house twenty minutes earlier, with two kids in tow, so that I could stop by the store for new shoes. I couldn't let his shoes talk to him all day long, and get him in trouble :) Then I'm really hard on myself. If I'd have bought the stupid shoes while I was already there, it wouldn't have changed my morning, but I'm going to put the blame on the shoes. If they had lasted more than a month I wouldn't be buying new ones anyway! This is a totally useless rant, but my rant.  Something more positive in the future I promise. I have a great afternoon planned for Sebastian and Tyler so I'll post details later.
Posted by Melanie at 6:18 AM

Question: do they drag their toes when they ride their bikes? That seems to be the culprit for my friend's kids. Also, nearly everything made nowadays is made poorly. It's like they do it on purpose so you have to keep purchasing stuff. FRUSTRATING! Hope your day got better! Take care!

They do drag their feet on their bikes and anywhere there is dirt! It is so frustrating!