When Tough Little Boys Grow Up To Be Dads, They Turn Into Big Babies Again

The title of this post was taken from the song Tough Little Boys by Gary Allan.

I've always liked my father in law, Johnny. However, life gets busy and we didn't always see him as much as we should have. Months often passed before we would head up the creek to visit. He lives about 20 minutes out in the country and it's commonly just called the creek. Anyway, right after Mike passed away Johnny stopped by the house several weeks in a row, and I took the kids to see him. When summer came along we took all those trips, and we didn't see him for about two months. About a month ago while I was at the cemetery Johnny pulled in. We talked for a bit, and I promised to bring the kids up.

Johnny is a country boy, and I mean absolutely no disrespect with that comment. He lives in the country, raises chickens and rabbits, and has a lot of cats and dogs. He is tan from hours upon hours of working outside. I chuckle when I'm up there because, everyone knows everyone else, and anyone who drives past his house beeps their horn and waves. There is an apple tree in the yard, and tons of apples on the ground. The kids love taking a stick, putting an apple on the end, and then throwing it as far as they can. They could do that for hours, and Johnny just laughs as they do. Sebastian helps mow the lawn, and loves being on the riding lawn mower. Tyler plays with the rabbits, and Johnny has promised to build her a nice cage so that she can have her own rabbit at home. I'm grateful for this relationship with him. I'm sad that it took Mike's death for he and I to get closer, but I'm grateful all the same.
He harped on me for two weeks to get new tires, it was his way of worrying about us. He keeps my fridge stocked with eggs and sausage. He offered a hogs heart, YUCK, Mike would have taken it, me...not so much :). He always asks when we are coming up again, and if we are even five minutes late he calls the house to see where we are. I look at him and can picture what Mike would have looked like as an older man. They had a lot of the same mannerisms. I've learned a lot about who he is, and I love the relationship my kids have with him.
Let's be honest though, I'm incredibly grateful for all of our family members on both sides, especially the male role models. The kids get to see Uncle Scott and Aunt Marie in the morning, and you would have thought tonight was Christmas Eve. They couldn't sleep. They hang the moon on what their Uncle Mikie says, and they secretly think he's the master of the grilling out. Uncle Michael is patient and kind, and is always up for playing with them. Uncle Matthew is the cool traveling uncle who brings them cool stuff from far away magical places, like Texas. Seriously Matthew, those Jelly Beans were gross! To both grandpas, we love you. Thank you to all the people who are filling roles that I can not. 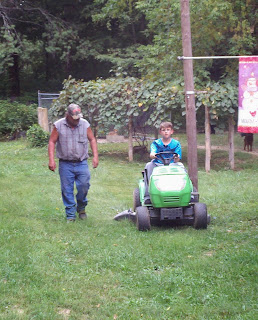 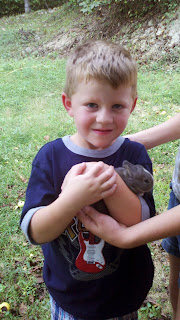 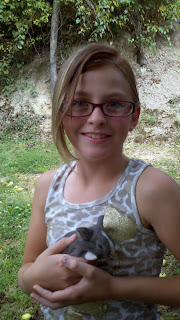 GREAT post , Melanie ! I'm guessing , that like me , you didn't get alot of sleep , either, tonight. I remember seeing Mike's Dad at the funeral......looked like a really special guy & this post proved that. We have to love our country roots ! So happy that the kids have that ! You really are blessed that there are so many wonderful male role models , in your extended family ! Love you & try to have a nice day !!!