I Need To Break Out And Make A New Name

The title of this post was taken from the song Brand New Day by Ryan Star.
I can't seem to sit long enough to write out a post. Part of it is my attention span. My mind goes twelve places at once, and then I just lose track of what I'm doing. Anyway, last Saturday, I took the kids to Washington DC to see DC United play soccer against Chicago Fire. My dad went with us, and we had such a good time. Two years ago, Mike and I took Sebastian, and this time I felt it was okay for all three kids to go. DC lost and it all really happened in the last 10 minutes of the game, but it was amazing to spend that time with my dad and the kids. 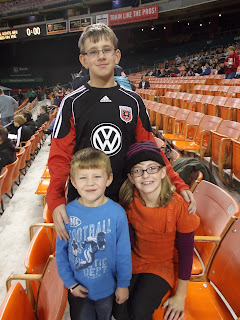 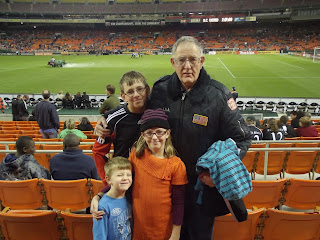 It's been a good week for me. Sebastian had a doctor's appointment, not going into details, but it went well, and they estimated that he'd be 6'3''. Yikes! I have such wonderful kids. They really are amazing. Mason, we call him moose goose, don't ask. Anyway, he's in Kindergarten this year. He has a personality all of his own. I'm so lucky to teach in the same school they are in, and I saw him at lunch the other day. He had a hole in his shirt. I knew I hadn't sent him to school that way, because I had ironed his shirt that morning. I asked him about it, and he just said "I wanted to see if my scissors would cut it." Awesome, thanks bud. Then I look at his pants and he has milk splattered all over them. They said he was blowing bubbles in his milk and got a little to carried away. He has such an amazing personality. Tyler is growing up so fast, and she has inherited her dad's artistic nature. She is always drawing, or asking for art supplies. She makes stuff for him, and wants to put it on his grave. I heart that child. Sebastian, while he is starting to give me that preteen attitude, he is so sweet and they other night did the dishes for me without being asked. Simply put I have amazing kids.
I also got to spend some time with Scott, Marie, Ender, and their family on Sunday. I love seeing my nephew! I heart Scott and Marie as well :) Here is my favorite picture from that day. 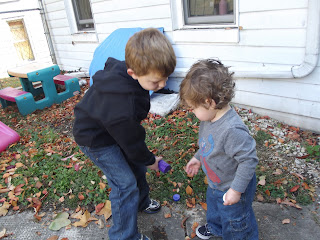 Saturday the 22nd, Sebastian will turn 12, and on the 30th Tyler will be 10. It's really horrible, but I'm having an awful time planning their birthdays. I just can't seem to get it together. We usually do something combined, so I guess maybe next weekend. I'll figure it out this week.
In all of the madness that has been my life this year, I'm coming to the realization that I need to simply recreate myself. I need to figure out who I am, and where I'm going. These new plans were not part of my old plans, but I'm coming to terms with the fact that this is the way it is. Who am I now? That is the question.
Posted by Melanie at 6:19 PM

That sounds about right. It seems like anything that happens to us in such a big way makes us examine our lives again. I hope you figure things out and find your way. Loved this post. Lots of bright notes. :) Take care.