I Won't Always Be This Way. When The Things That Make Me Weak And Strange Get Engineered Away

The title of this post was taken from the song The Future Soon by Jonathan Coulton.
I can't believe it's been a week since I last posted. Things have been busy here, and I've been a little emotional and sometimes I'll type something, but then don't feel like sharing because the moment passes and then it doesn't sound right. I do have two things I want to share.
This week at school Mason's Kindergarten class worked on families. Mason has a wonderful teacher, Mrs. Brown, and he loves her. One day for homework we had to fill out a sheet with Mason's parents names, brothers and sisters, and grandparents. He was then to send in a family picture to talk about at school. Yikes! I teared up a bit at this assignment. We looked at tons of pictures, but honestly there really weren't any with all five of us in them. I was usually the one taking the pictures so I had a lot with Mike and the kids, or me and the kids, but not with us both. Mason picked his favorite picture of them with their dad. 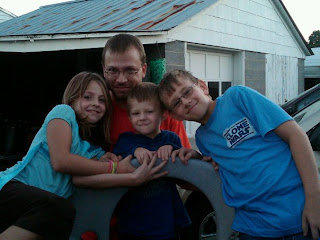 I knew that the first thing Mason would say about this picture was that his dad had died. I cried, hoped, and prayed that he would be able to talk about other happy memories with his dad. I wanted him to talk about his brother and sister, and all the fun things they did with their dad. When I spoke with Mrs. Brown about it, she assured me that it went well, and that he was able to talk about some good memories. On Friday, they had grandparents day in his class. Grandparents were invited for a special art project and snacks. The grandparents were to bring a twig, and the twig was then glued to a piece of paper. The children wrote the names of their parents, brothers and sisters, and grandparents on leaves, and glued them on the paper next to the twig. I was able to be in the class during this time, and as I watched little Mason work with my mom and dad on his project, my eyes filled with tears. I had to turn away. They were happy tears though, because Mason was openly talking about his love for his family, and that included his father. I loved hearing him talk about his dad. Pictures were taken with the grandparents, and there were snacks involved. It was a wonderful event, and I will forever be grateful for being able to be apart of this. I'm sure it was just as important for all the other grandparents, but it meant so much more to me as a mother, after what we've been through this year. So, a big thank you to Mrs. Brown for being the wonderful teacher she is. As a parent I truly appreciate all that she has done to ensure that Mason has a wonderful year, not only with him making new memories, but for giving him the chance to share his past in a positive way.
The kids had their horse show today. It was an emotional day for me. I watched as all three of my darlings, and my adorable niece, rode their horses with confidence and pride. Sebastian won first place in his class for equestrian and Tyler and Mikayla won 6th place in equestrian for their classes. I was so proud of them, and they were proud of themselves. There were many happy tears. Sebastian is already talking about the spring sessions and how much he loves riding. I don't feel like there are enough words to adequately express my feelings, so I'll post a few pictures. 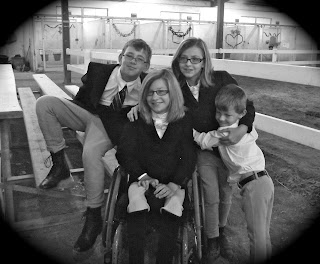 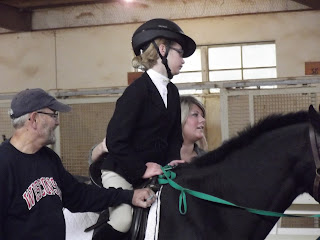 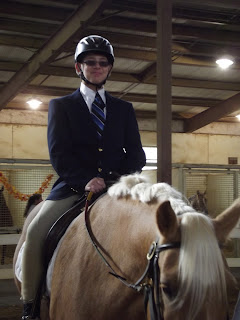 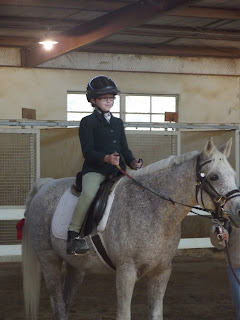 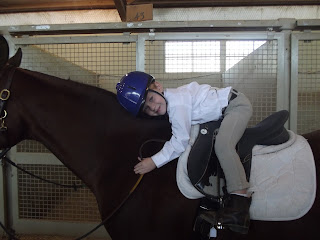 Really loved this post , Melanie, it brought happy tears to my eyes.
You have wonderful kids !!!! Sebastion looks so proud on his horse !

Beautiful post. I'm happy to see new, happy memories you guys are creating. What amazing kids you have!