Snow Can Wait I Forgot My Mittens. Wipe My Nose, Get My New Boots On.

The title of this post was taken from the song Winter by Tori Amos.

It snowed! We must have about 8 inches.  Mason stayed with my mom again last night, and Tyler stayed with Mandaly. It ended up just being Sebastian and I at home. We had so much fun talking, watching movies, and playing video games. I loved that one on one time. He opens up to me more when it's just the two of us. We both went to bed, and I got up around 6:30. I decided it was time to go out and shovel the driveway.
I've always enjoyed shoveling snow, but as I walked out the door I realized that I liked it because it was optional. I didn't have to do it. I did it because I wanted to lighten Mike's work load. I liked having the driveway cleared when he came home from work so that he didn't have to worry about it. As I picked up the new shovels he bought last year, it hit me that this is no longer an option. I either do it or it doesn't get done. Here is part of the driveway that we share with our neighbor. 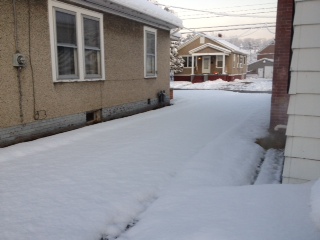 So, I started to shovel, and shovel, and shovel some more. I thought about my dad as I slowly moved down the driveway. Dad always shoveled his driveway and several of the neighbors, and then he would do their walkways. There was never any questions asked. I made it to the bottom of the drive and smiled at my handy work. 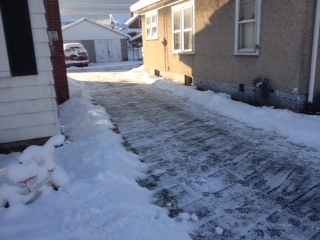 Then I looked over to my neighbors house. He is an older gentleman and his porch is usually cleared off way before ours. However, this morning it was still snow covered. I took my shovel and cleared his walkway, and then came back to work on ours. Dad never made a big deal about helping the neighbors, he just did, and then we learned through example. I decided to do the same thing. I wasn't going to brag to the kids that I had helped this gentleman out. However, when Mason came home from mom's today he was walking around in the driveway, and he paused for a second. He looked at our walkway, then over at John's, back at ours, and back over to John's. "Mom, you need to learn to shovel like John. Look how neat his sidewalk is, and look at ours." My response "Yea, well John has more experience than mommy." My cute little man. I guess later I will take them out sledding. Once again this is something I've always enjoyed doing with them, but most of the time Mike was with us. I'm not sure why knowing that its only me makes it feel twelve times harder.
Posted by Melanie at 6:40 PM