All We Wanna Do Is Eat Your Brains

The title of this post is from the song Re: Your Brains by Jonathan Coulton.

I was so angry I didn't even get a picture before I cleaned it up. As I was getting Mason up and ready for school today I happened to look at a little inconspicuous place on his bedroom wall. To my surprise and horror, I realize that he has drawn on his wall and in pen no less. Upon closer inspection, I realize that the picture is of a zombie apocalypse. Yes, he had drawn pictures of zombies patrolling a graveyard. The drawing was complete with headstones and all. He even wrote a word bubble for one zombie that simply said "Brains" except he spelled it "Brannnnns." I was not amused in the least bit.
I am not one to squash my kids creativity but drawing on walls is a "no-no" in our house. He could have asked for drawing paper or canvas to paint on but, for the love of Pete, do not draw on the walls! Now that I've had a chance to calm down, I realize that maybe I overreacted a little bit. The thing is, this gave me flashbacks to when Tyler was little. That child was always into something. I would put her to bed at night, she would be sound asleep when I went to bed, and then I'd wake up in the morning to find that she had woke up in the middle of the night to create some sort of masterpiece. When she was about four, she carved her name into her headboard with a pencil. It must have taken some dedication because it was pretty deep. One morning I woke up to find that she had found a black sharpie and had colored her entire face with it. Yeah, that was fun to try and clean up and then explain to her teachers at school. I would wake up to find markers, crayons, playdoh, scissors, and cut up bits of paper on her floor. She is a creative mess. When she was three, she woke up in the middle of the night to play with her Lite Brite. The next day she was pretty sick and we took her to the doctor who immediately put her in the hospital with pneumonia. After three days, she was worse than when she was admitted and upon further inspection of her x-rays, they realized there was a foreign object in her lungs. Care to take a guess at what it might have been? It was a green Lite Brite peg just like the green one shown in this picture. 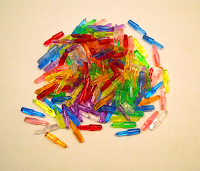 It was later determined that she had shoved one so far up her nose that it worked its way into her lung. Talk about good times. I guess thinking back over all of her little antics I simply can't be mad over one little zombie apocalypse drawing.
Posted by Melanie at 4:59 PM

This made me lol... So not funny when it all happened I'm sure, but you gotta love those kids, they always keep it interesting!