So Innocent, Pure and Sweet

The title of this post was taken from the song American Honey by Lady Antebellum.

I thought I would give a quick update on how Mason is doing with his anxiety and behavior at school. If you don't know what I'm talking about you can read about it here. Mason continues to see Dr. Rob every other week and he loves it. He will often ask "Is this a Dr. Rob week?" or "When do I get to see Dr. Rob?" He likes going and he likes talking to him. Mason is doing great! Just a few months ago my heart would pound as I asked him to give me his behavior sheet from school. I wasn't sure what it was going to say and it made me anxious. Now there are days that I forget to ask for it because he just isn't having problems in school. Now, don't get me wrong there are still some classes that might have a mark for talking to much or something small like that, but it doesn't cause Mason to come unglued like it used to. It doesn't carry over to the rest of his day and he accepts the redirection very well. Months ago a redirection to stop talking could have caused him to shut down and refuse to do anything for hours at a time. We are in such a good place with him right now.
I'm so proud of him and the progress he has made. I'm so glad that I listened to my instincts and didn't put him on medication when the psychiatrist suggested it. I'm glad that I did what I knew was best for my son and our situation. Mason is still a bit hyperactive and his therapist has said he would classify him as having ADHD, but right now we are managing that by limiting his sugar intake, and trying to eat healthier as a family. We also let him run and play as much as possible to help keep his energy levels in check and we are using some behavior modification techniques. This is working for us.
The other day I asked Mason why he thought he was doing so much better in school now as compared to the beginning of the year.

"I don't know mom. I just know I feel better and I'm not as angry. I'm getting nicer."

"You know you were always nice." 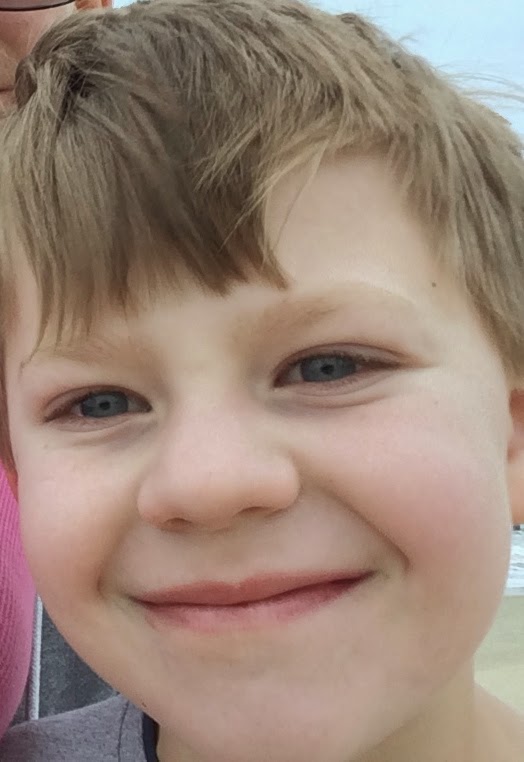 Love this boy and his happy face.

Look at that sweet face. I have always thought Mason looked like you, UNTIL this picture. Wow! Does he look like Mike in this one! Mason is just a little fella, and losing his dad was a HUGE event in his life. It had to come out sometime, somewhere. I am glad you followed your instincts (the spirit;) Moms usually know best. Prayers and hugs to you and yours. *and especially to Mason♥

He does look a lot like his dad :) I'm so grateful that I didn't let the doctor bully me into what I knew wasn't right. He is doing so well now!