Welcome To A New Kind Of Tension. All Across The Alienation.

The title of this post was taken from the song American Idiot by Green Day.

It's been a rough week. I absolutely cannot believe Trump was elected President and I held out a very small hope that something would change that before the inauguration this week. I don't want to talk about politics tonight. We are a nation divided. I am exhausted from debating or biting my tongue to keep from debating. I had an aunt, that I haven't talked to in 10 years attack a post I made on FB in regards to the nomination for Secretary of Education. I ended up deleting my posts because it was clear she wasn't looking for a debate. She was hell bent on being right and was trying to convince me just how wrong I was. I wish I had just deleted her comments. Instead I allowed her to wear me down. I've since deleted the FB app from my phone. I still get on from my computer, but I've significantly decreased the amount of time I spend on social media. In conjunction with that I've started tailoring my friends list and getting rid of people that I don't really know or talk to. It's a work in progress.
This coming week will be the first full week of school since before Christmas. It's going to be a busy one. On Thursday Mason gets braces on his top teeth. I'm excited for him because I think the gaps in his front teeth bother him and it's going to be a process to get his teeth where they need to be. He will have to have an expander put in to widen his upper jaw. All of this will be done in stages, but we start on Thursday. Tomorrow would have been Mike's 41st birthday. It's still so hard for me to believe he is gone. We plan on getting helium balloons so the kids can write him notes and we will let them go outside. Maybe we will go out to dinner. Tyler asked if we could go to the cemetery, but it's supposed to rain really hard tomorrow so we will see. Thursday is also Blake's second birthday. I can't believe my little man will be two. He has the sweetest disposition about him and I love him so very much.
I'll end with a two pictures from this week. 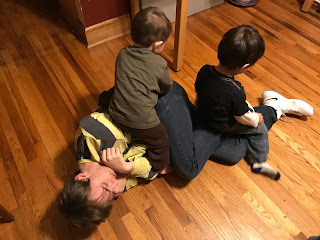 Sebastian will often get in the floor and let the little boys wrestle with him. They absolutely love it! 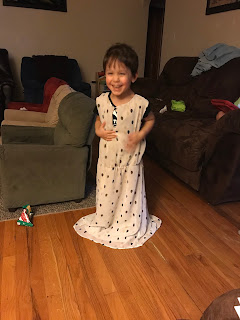 The other day Jaxon went upstairs, got in Tyler's closet, and put on one of her dresses :) I had to snap a picture.

Posted by Melanie at 5:47 PM No comments: Links to this post

"These are your last hours of this year. Are they gonna waste or will you do something worthwhile with them? Think about it."

When I saw that on New Years Eve I lost it. I had already been struggling through the Holiday break and this had me balled up on the bathroom floor unable to do anything but cry. His words made me think about not just that night, but the years to come. In my head I changed his words just a little..."These are the best years of your life. Are they gonna waste or will you do something worthwhile with them? Think about it." While I've accomplished a lot in my life and I have a lot to be thankful for I still feel incomplete. What the heck am I doing and who the heck am I? I didn't make any New Year's resolutions, but I started some new habits that happen to coincide with the start of a new year. I started reading the book The Gifts of Imperfection by Brene Brown. I work so hard at being who I think I need to be rather than who I am. I've traded my authentic self for approval of those around me. Anyway, I'm working on me.
Here are some of my favorite pictures from the last several weeks. 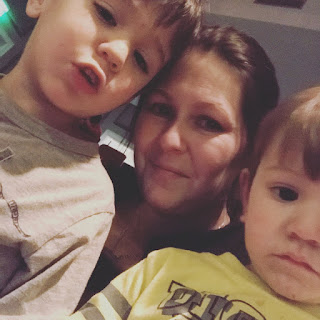 Me and my littles.
This wasn't a good day, but it was a good moment. I captured a moment with an actual smile and only trace amounts of anxiety. 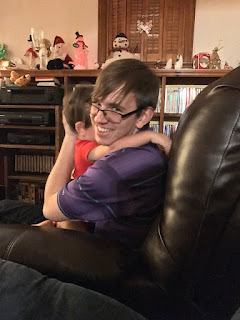 Sebastian will make an incredible father one day. I love watching them run up to him and call him by name. The little boys struggle to say Sebastian so it always sounds like "mashun". 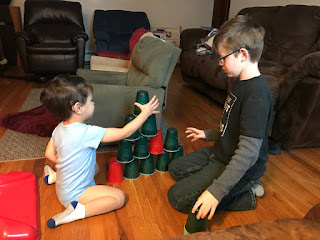 Jaxon and Mason playing together. I love these moments. All to often I find myself reminding Mason that he is 10 and Jaxon is 3 and we don't treat our brothers like that, sigh. This makes those moments worth it. 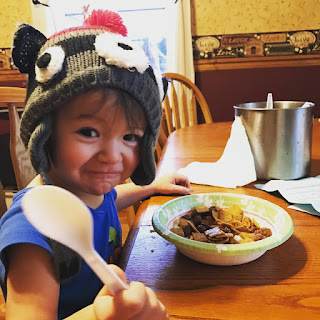 Blake loves this hat. It's now missing an eye and the nose, but he wears it all the time. 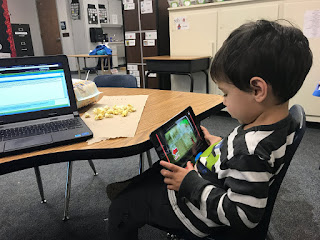 Our baby sitter quit on us unexpectedly just before Christmas break. There was a disagreement about some of the things involving the kids and she quit. At the time I was hurt and very angry, but everything worked out and this picture is the outcome of everything. Jaxon is now in the preschool program at the Y, which is at the school I teach in. He comes to school with me and I pick him up right after school. On this day He played on an iPad while I got some work done. I am so glad I get to see him a little more. Blake is spending his days with my mom and they are both loving it! 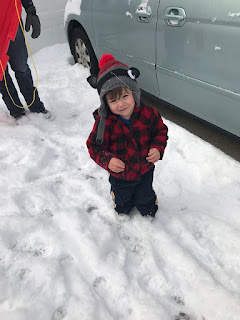 There's that hat again. He liked being outside with us but he did not like getting snow on his shoes or his hands :) 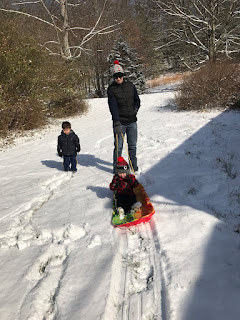 We all went sledding at Megan's house and the kids had so much fun! I'll admit that it took a lot to talk myself into getting five kids and myself bundled up and out the door into the cold. I'm so glad we went because we made memories. 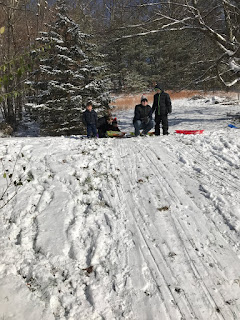 All five kiddos checking out the hill. 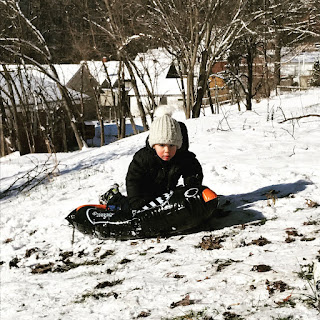 Jaxon was my little daredevil. He went down the hill over and over again and laughed the whole time. He even managed to carry his penguin sled back up. He stole my hat because his hood wouldn't stay up, and when I put it on his head he said "Mommy, this is the best!"
Posted by Melanie at 9:02 PM No comments: Links to this post